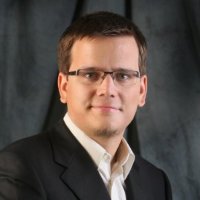 Luka Zibelnik was sent by the Center for Slovene as a second or foreign language of the Faculty of Arts at the University of Ljubljana to open and teach at the lectureship at the Cleveland State University, OH in August 2008.

Since then he started many projects, including visits and exchanges of the academics, artists etc; organized a seminar for Slovenian teachers in the US; and lectured on different topics regarding teaching a foreign language; literature, metaphors and anti-Semitism in literature at the different colleges and institutions (Ohio State University (OH), Cleveland State University (OH), Tri-C (OH), LCC (OH), Pittsburgh University (PA), Nazareth College (NY),  French Embassy in Washington DC, Slovenian Embassy in Washington DC and Library of Congress.

In the academic year 2010/2011, he started with a doctoral study at the University of Ljubljana. His main topic will be anti-Semitism in the Slovenian literature from 16th to the beginning of the 20th Century.

In the academic year 2013/2014, he opened the first Slovenian online class at Cleveland State University. That has proven to be successful as 50 students from all around the US have joined the classes.

In the academic year 2014/2015, the class continued as online intermediate Slovenian.  Also, there were 50 new students enrolled into the online beginner class again.

Lectureship of Slovenian language, carried by CSU and the lecturer, is organized as a part of a program called Slovene at Foreign Universities by Center for Slovene as a second or foreign language at the Faculty of Arts at the University of Ljubljana.